–> Japanese version of this article

Optigan is an optical organ manufactured in 1970’s as an easy-to-play instrument by Matel, a U.S.A. based toy company.

looks good.  How about sound?

However, it’s been long since the Optigan is terminated. It is quite difficult to obtain the organs in Japan. I kept studied on this organ, then I knew there was an improved version of optical organ, Orchestron. But it is more difficult to obtain, nearly impossible.

But, I happened to know the discs for Optigan and Orchestron are still available. OK I’d get them. How do I do with the player? Hmm… OK I’d make it.

I started this project like this: Making an optical organ.

First thing I did after I received the discs was investigating. First of all, the appearances are as follows. The left side is for Optigan and the right side is for Orchestron. 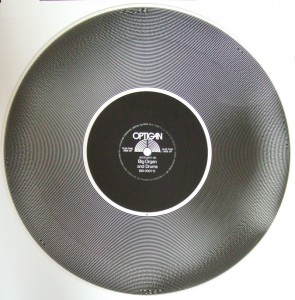 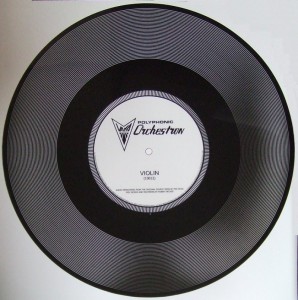 The theory to make the sound from the disc is simple.

Like above, the disc has multiple tracks placed as concentric circles. Each track has a waveform pattern as thickness of light slit. So waveform signal is generated by picking up the light through the slit in the rotating disc. 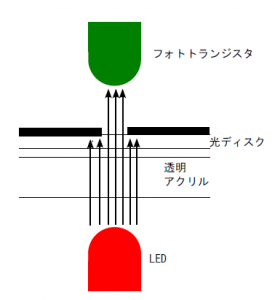 I tried if you can actually pick up the sound from the disc:

So far so good.

3. Overview of the Design

The goal of the project is to read Optigan and Orchestron discs. The hardest part is to make rotating mechanism to turn discs, so I decided to modify an analog record turntable. the project would be much easier by exploiting its rotating mechanism. Luckily, the size of the optical discs are mostly the same with analog LP disc.

A clear and round acrylic table is placed a few centimeters above the turntable so that we can put the organ disc on the table and bind it by optical transistor and light source from above and beneath.

I need to draw a detailed design from the rough sketch above in order to actually make the player. So the first information I need is dimensions of the disc.

I could not find any information about it on the net. But no problem, I have the actual discs so I can measure them. Accurate pictures of the discs follow. The left is Optigan and the right is Orchestron. 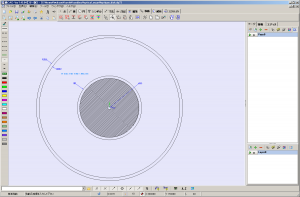 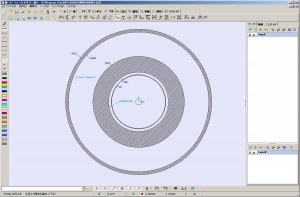 Positions of Optigan and Orchestron tracks are the same (Orchestron is subset of Optigan).

So you may make the Optigan and Orchestron player without replacing the disc reader.

Now I know the disc dimensions so next thing to do is mechanism design. I designed the mechanism as an attachment of record player. The final design is as follows: 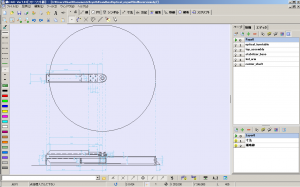 Following the initial idea, I placed a clear disc 20mm above the turntable with two arms stretched above and below the disc. Above has optical optical transistors for each disc tracks. Below has LED light source.

Design has been done. Now it’s time to making parts. The first one is the clear disc assembly. This is an H-shaped object like a huge bobbin. 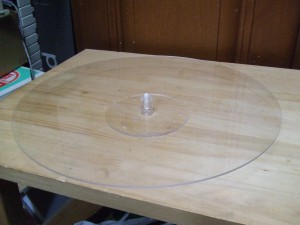 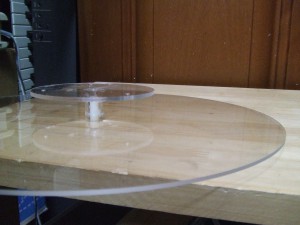 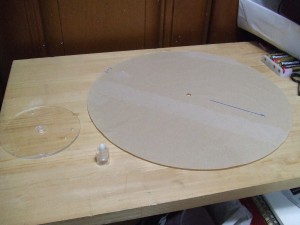 I used a CNC milling machine to make the left small disc. The large right disc is a ready-made one bought from a plastics shop. The part in center is made from acrylic pipes and an ABS bar. 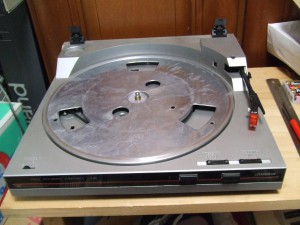 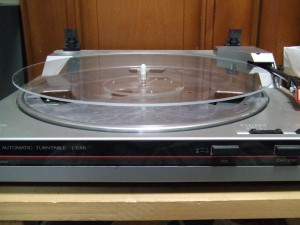 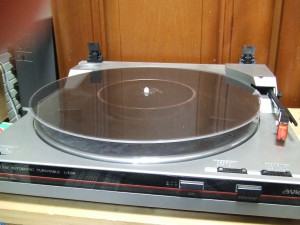 This part is done by placing on the turntable. However, I found the disc flatters when I rotates the disc. Moreover, this is a plastic plate so it might be bent over ages. So I added three toy wheels as stabilizers. 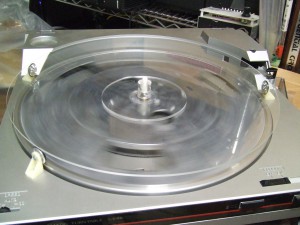 At this point I verified if I can go with design, which was OK.

The design of the LED arm is as following 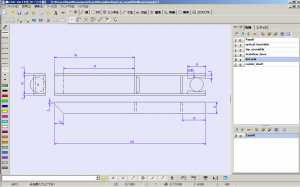 On the left hand I will have a supporting wall where I attach the arm using a hinge.  On the right side the arm lightly bites the shaft of the clear disc assembly.  Also I need some mechanism to keep the arm floated.  So I used a toy wheel again. 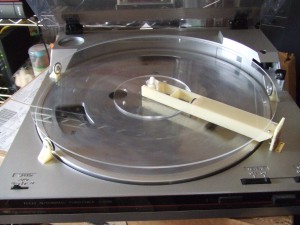 By the way, I used ABS as the material of mechanical parts except clear ones.  For clear parts, I used acrylics.  I used a CNC milling machine to cut the materials out. 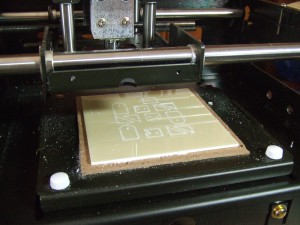 Two arms are needed for the optical organ.  One was the LED arm for light source.  This is placed under the clear disc.  On the above is the sensor arm.  The arm visible from above in the overall design picture is the one.  One side is attached to the supporting wall using a hinge.  The other side is put on the center of the disc.  I have a ball bearing there to prevent friction against the disc. 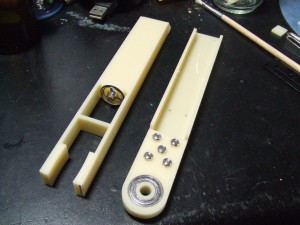 And placed them to the disc. 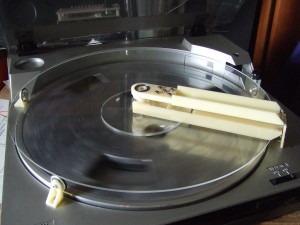 The mechanism is mostly done.  Next I need to make electrical parts.  I started with the LED array.  This is the light source for the optical sensors. 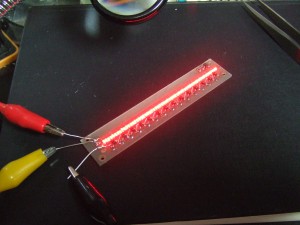 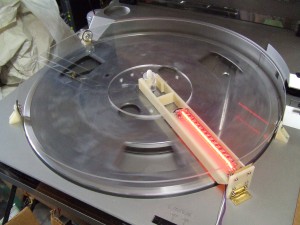 The schematics is below.  The LED drivers are constant current circuit using transistors.  The currents are controllable by the base voltages in the transistors.

The schematics of the block per single track is as follows.  The sensor array has 58 blocks. 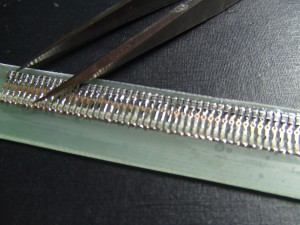 The soldering was a bit hard.

One of the major problems in making optical organs is crosstalk.  The original Optigan and Orchestron had the same problem.  So the Orchestron, the improved version, has 5th interval progression in their tracks to make crosstalk less noticeable while the Optigan is chromatic.

What is crosstalk?  The following picture explains well. 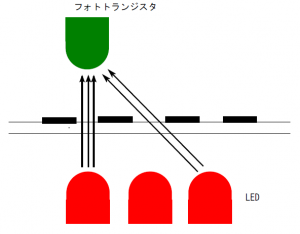 So the crosstalk is a problem that a photo transistor picks up signal from next track.  The organ in this project has the issue as well.

What is the solution?  The following picture explains well. 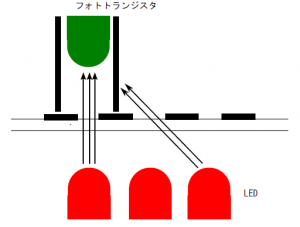 So you can prevent crosstalk by placing screens.

I made the screens as following.  The black plate has the screens.  Each fine hole along the center axis has photo transistor in it.  The walls of the holes work as screens. 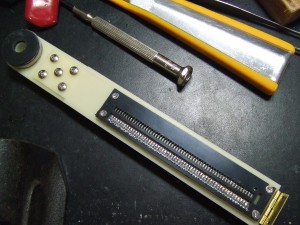 This was a challenge against the limitation of the milling machine (well, it’s for me.  maybe other people are better :-).

An Optigan disc has 58 tracks.  The player reads these 58 tracks simultaneously.  In order to play the disc, you need to choose tracks you want.  In other words, you need a switch for each track.  The control/mixer board does the work.  This board chooses the tracks the performer want and mixes the signals to output.  The schematic is as following.  It’s simple but quite large-scale. 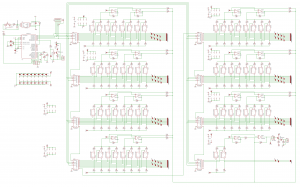 The board receives signals from the sensors through capacitors.  And they go into mixers.  Between those, each signal is controlled by a C-MOS analog switch.  The analog switches are controlled by ATMega88 micro processor via shift registers for switch signal serialization.  The order from the performer is received via MIDI.  The micro processor also decodes the MIDI signal.

Following is the finished control/mixer board. 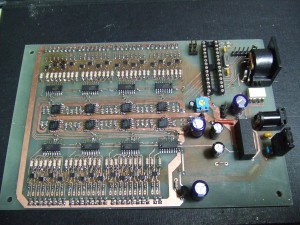 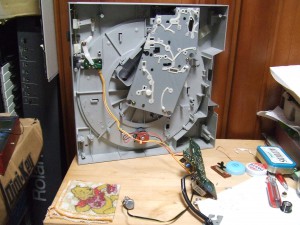 Also I added a tuning dial that changes the rotation speed.

14. Connecting the Arms and the Board

Next I connected LED/sensor arms and the board each other.  There was no difficulty at this part.  It was sodering, soldering, and soldering. 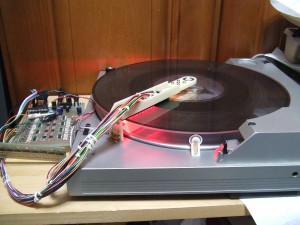 The frame is not luxury.  It is just made of an acrylic plate on the board on an acrylic base.  But I am happy with the player hardware done. 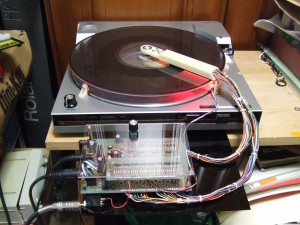 The last but not least is programming.  The controlling board has a micro processor that decodes MIDI signal into ON/OFF order to the switches.

Also, I made a song for the optical organ:

I want to play this organ for a while. Meanwhile, I might have some idea for improvement or some gimmicks. In some future, I’d make the another version. Currently, following ideas are on the list.

Also, it is nice if I can make the optical disc by myself. That makes the usages of the organ more wide.

This site uses Akismet to reduce spam. Learn how your comment data is processed.